Ralph Tresvant isn’t just a talented singer and performer. He’s also a doting father of four children he loves dearly. For those who don’t know, the Roxbury, Massachusetts native has two sons, Ralph Jr. and Dakari, and two daughters, Mariah and Na’Quelle. It also looks like Ralph’s talent has rubbed off on one of his children – his first born child, Na’Quelle.

Now a beautiful, married adult with her own child, Na’Quelle Tresvant is looking to make a name for herself in the music industry. Needless to say, not only is she strikingly beautiful, but she has an amazing voice just like her father. *Scroll down to see her mother, husband and kids* 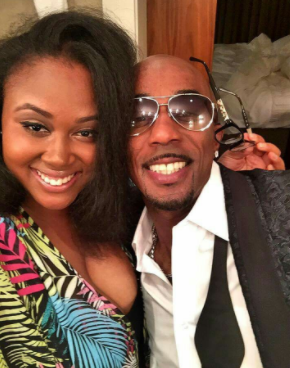 However, Shelly’s name may not have been one you heard in The New Edition Story because their storyline was altered a bit. In the biopic, her name was changed because she did not want to be associated with the film. Her name was changed to “Zena” in the popular biopic and, of course, the change didn’t go unnoticed by fans. Many took to Twitter to share their reaction to the change.

Is zena another name for Ralph tresvant ex wife Shelly ?

For those who don’t know, Ralph and Shelly went through a bitter divorce. Despite being each other’s childhood sweethearts who grew up to have three children and many years together, things went awry as Ralph embraced stardom. They eventually divorced in 1996, after three years of marriage. After the divorce, Ralph married his second wife, Amber Serrano, in 2004, whom he welcomed his fourth child, Dakari, with.

Despite all of the drama and Ralph’s level of stardom, his gorgeous daughter, Na’Quelle, has revealed that she and her father are very close and she actually lived a relatively normal lifestyle. She first realized her father was famous when he arrived to pick her up from school one day. As he approached his daughter, a group of starstruck girls flocked to him and immediately began losing their minds over the fact that the Ralph Tresvant was standing before them. Of course, all of the attention and pandemonium seemed odd to Na’Quelle but that’s when she said she’d first realized her Pops wasn’t like everyone else’s father. Ralph Tresvant’s name carries weight! You can check out what else she revealed in her interview with ‘The OTAP Show’ below…

Na’Quelle’s pops is one of the biggest legends in R&B music, so it was only natural that she married a man who’s also in the music industry. That man is her music producer husband, Darius “King D” Smith…

Na’Quelle Tresvant and husband, Darius [Instagram] Darius and Na’Quelle have three children together- two sons and one daughter son…

Ralph must be really proud of his daughter, Na’Quelle, and she has a beautiful fam.’ Hopefully, her music career will soon soar to new heights as well! She definitely has an amazing voice to match her beautiful looks and besides, we’d love to see another ‘Tresvant’ in the game.